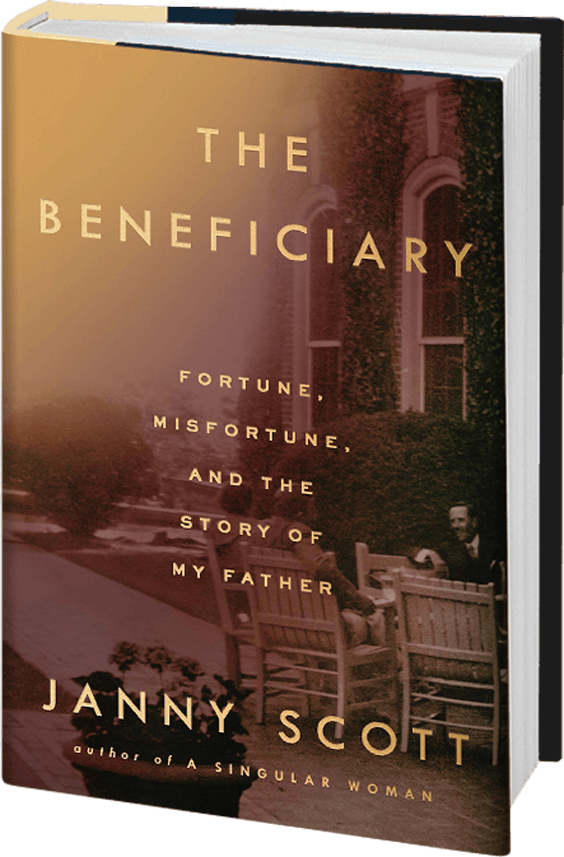 A parable for the new age of inequality: part family history, part detective story, part history of a vanishing class. The Beneficiary is a compelling exploration of the degree to which an inheritance—financial, cultural, genetic—conspired in one person’s self-destruction.

Land, houses, and money tumbled from one generation to the next on the eight-hundred-acre estate built by Scott’s investment banker great-grandfather on the Philadelphia Main Line. There was an obligation to protect it, a license to enjoy it, a duty to pass it on. But it was impossible to know in advance how all that good fortune might influence choices made over a lifetime.

In this warmly felt tale of an American family’s fortunes, Janny Scott excavates the rarefied world that shaped her charming, unknowable father. The Beneficiary offers an incisive look at the weight of inheritance, the tenacity of addiction, and the power of buried secrets.

Some beneficiaries flourished, like Scott’s grandmother, Helen Hope Montgomery Scott, a celebrated horsewoman and socialite said to have inspired Katherine Hepburn’s character in the play and Academy Award-winning film The Philadelphia Story. For others, including the author’s father, the impact was complex.

Bringing her journalistic talents, light touch, and crystalline prose to this powerful story of a child’s search to understand a parent’s puzzling end, Scott raises questions about our new Gilded Age. New fortunes are being amassed, new estates are being born. Does anyone wonder how it will all play out, one hundred years hence?

“Every family has its secrets. Each generation is affected by the last. When Janny Scott set out to solve the mystery of her father’s perplexing final years she had no idea what she would find. The Beneficiary is the compulsively readable result. A rare combination of wit, empathy, candor and shrewd sleuthing, it’s a multigenerational story that encompasses the Gilded Age, great wealth and two World Wars, suicide and secret affairs, hidden diaries and the life-long impact of alcohol. The world of wealth and privilege Scott recreates so vividly may be hard for the rest of us to imagine, but everyone will recognize the flawed but fascinating human beings at its heart. Not to be missed.”
—Geoffrey C. Ward, author of the National Book Critics Circle Award–winning, Pulitzer Prize finalist A First-Class Temperament: The Emergence of Franklin Roosevelt, 1905–1928

“A compelling portrait of a family, a flawed father, and a patrician way of life on the decline. Janny Scott writes with powerful love and no-nonsense honesty, in equal parts. Her Philadelphia Main Line forebears come off as admirable, hilarious, sometimes awful, and sometimes heart-wrenching in their fates—immensely fun to read about and hard to categorize. This elegant memoir offers a vertiginous look at where our age of inequality might lead.”
—Ian Frazier, nationally bestselling author of Family and Great Plains

“This memoir of Scott’s Philadelphia family is a poignant addition to the literature of moneyed glamour and its inevitable tarnish and decay. Scott, a former reporter for the Times and the biographer of Ann Dunham, Barack Obama’s mother, writes with both dispassion and passion, pitiless wit and something like love as she describes generations of secrets and the end of the line for her family’s preposterous fortune. The vivid portraits of Scott’s grandmother Helen Hope Montgomery (the model for Katharine Hepburn in “The Philadelphia Story”) and her hard-drinking, opaque father, Robert Montgomery Scott, are like something out of Fitzgerald or Waugh.”
— The New Yorker

“‘The Beneficiary’ describes the making and spending of ‘a moderately sized American fortune’ that lasted from one Gilded Age to another. It is often very funny, with some moments paced like a drawing room comedy. Yet the duke inherited something more (or other) than money, and what comes to dominate his daughter’s narrative is her sense of wealth’s ‘misfortune’.”
— The New York Times Book Review

“Ms. Scott is a keen observer of social forces and mores. The story she tells could be the plot of an Edith Wharton or Henry James novel…Her prose, too, has that Gilded Age feel: decadence, decay and drink waft gorgeously off the pages.”
— The Wall Street Journal

“As attentive to outré details as to psychological turmoil, Scott makes the most of the suspense built into her story. Her father, having promised Scott in her 20s that she would inherit his many diaries, made her hunt long and hard for them after his death in 2005. The bequest was brilliant: A man in unhappy thrall to a place lured his daughter further and further in—and she escaped with priceless insight into its, and his, hidden depths.”
— The Atlantic

“The magazine article, Janny Scott writes, ‘was humorous, elegiac, and tinged with melancholy,’ words that also are exactly right for ‘The Beneficiary,’ her engrossing, lovely but wholly unsentimental portrait of her family and her father.”
— The Washington Post

“Scott brings her journalistic skills to this perceptive social history of the Gilded Age on Philadelphia’s Main Line and insightful investigation into her own father. With wit and understated elegance fitting her subject, Scott recovers this history of her family – with a grandmother who was the inspiration for Tracy Lord in The Philadelphia Story and a charming but rather absent father in existential angst, mirthfully known as “the Duke of Villanova” – and bares the hidden injuries of privilege. ‘He was a beneficiary of abundant good fortune, that’s a fact,” Scott writes of her father. “But good fortune doesn’t necessarily drop from the heavens unencumbered.’ ”
— The National Book Review

“[The Beneficiary is] vivid and penetrating…A wise and poignant memoir about all the things money can buy — and all the things it can’t.”
— Maureen Corrigan, Fresh Air, NPR

“Janny Scott set out to write a book about her father and his and her glamorous, eccentric, fabulously rich and spoiled forebears. She did so magnificently, but her book is more than a family saga. It is a detailed social history of a vanished era in our past, of a place and time quite unlike our own.”
—David Nasaw, New York Times bestselling author of The Patriarch: The Remarkable Life and Turbulent Times of Joseph P. Kennedy and Pulitzer Prize finalist Andrew Carnegie

“Once in a while you read a biography that is crafted to sound like fiction. Janny Scott has pulled this off. And it is pitch perfect.”
— The Florida Times Union

“A remarkable book . . . Scott, who has an eye for the telling detail, writes with wit and flair.”
—Frances FitzGerald, author of National Book Critics Circle Award–winning, National Book Award–finalist The Evangelicals: The Struggle to Shape America

“Told without false modesty or overweening privilege, Scott’s story is a well-paced narrative punctuated with lyrical prose. This is a fascinating glimpse into a rarefied world.”
— Publishers Weekly

“The family story the author tells is fascinating for the painful personal legacies it uncovers. At the same time, it is also compelling for the parallels it draws between an earlier age of inequality and our own, and the questions it raises about how contemporary stories of new-rich families ‘will play out, one hundred years hence’. A heartfelt and rich narrative tapestry.”
— Kirkus

“A compelling and detailed portrait of a time, place, and way of life that would be foreign for most readers.”
— Booklist