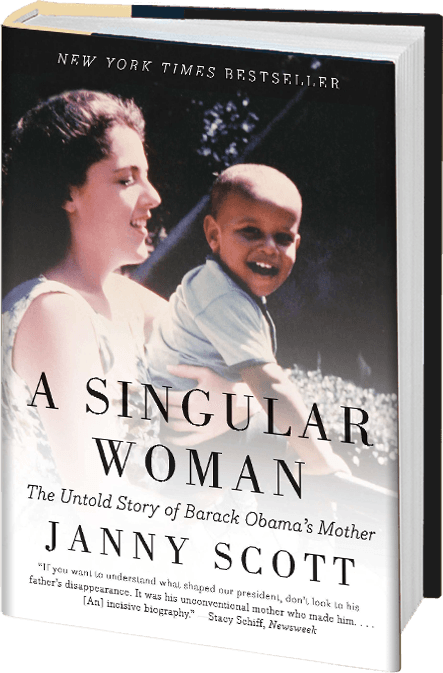 The New York Times bestseller–an unprecedented look into the life and character of the woman who raised a president.

Barack Obama wrote memorably about his father. But he credited his mother, Stanley Ann Dunham, with “what is best in me.” A Singular Woman tells the moving story of an unconventional woman who emerged from a conventional time, traversed boundaries and cultures, and raised the son who would become the first biracial president of the United States.

Beginning in a time when interracial marriage was still a felony in much of the country, and finding its culmination in the years when President Obama was in the White House, A Singular Woman offers a rare window into how Barack Obama’s destiny was shaped early by his fiercely independent, spirited mother’s faith in his gifts, and by her unorthodox parenting.

“To describe Dunham as a white woman from Kansas is about as illuminating as describing her son as a politician who likes golf. Intentionally or not, the label obscures an extraordinary story — of a girl with a boy’s name who grew up in the years before the civil rights movement, the women’s movement, the Vietnam War, and the Pill; who married an African at a time when nearly two dozen states still had laws against interracial marriage; who, at age twenty-four, moved to Jakarta with her son in the waning days of an anti-communist bloodbath in which hundreds of thousands of Indonesians are believed to have been slaughtered; who lived more than half of her adult life in a place barely known to most Americans, in an ancient and complex culture, in a country with the largest Muslim population in the world; who spent years working in villages where an unmarried, Western woman was a rarity; who immersed herself in the study of a sacred craft long practiced exclusively by men; who, as a working and mostly single mother, brought up two biracial children; who adored her children and believed her son in particular had the potential to be great; who raised him to be, as he has put it jokingly, a combination of Albert Einstein, Mahatma Gandhi, and Harry Belafonte, then died at fifty-two, never knowing who or what he would become.”  — from A Singular Woman

“A Singular Woman . . . is a perfectly titled page turner about an unconventional American life, one governed by curiosity, ambition, perseverance and passion. If you think Barack Obama is a pioneer, you haven’t met his mother.”
—Time

“The key to understanding the disciplined and often impassive 44th president is his mother, as Janny Scott, a reporter for the New York Times, decisively demonstrates in her new biography A Singular Woman. . . . Scott [uses] meticulous reporting, archival research and extensive interviews with Dunham’s colleagues, friends and family, including the president and his sister. What emerges is a portrait of a woman who is both disciplined and disorganized, blunt-spoken and empathetic, driven and devoted to her children, even as she ruefully admits her failings and frets over her distance from them.”
—The Washington Post

“Meticulously-researched and well-written . . . a necessary counterpart and corrective to Obama’s first book Dreams from my Father.”
—Financial Times

“Even Obama knew that he had not done his extraordinarily interesting mother justice. Janny Scott . . . does. She portrays Dunham as a feminist, an utterly independent spirit, a cultural anthropologist, and an international development officer who surely helped shape the internationalist, post-Vietnam-era world view of her son. Scott’s book is tirelessly researched, and the sections covering Dunham’s life in Indonesia especially are new and valuable to the accumulating biography of Obama’s extended global family.”
—The New Yorker

“If you want to understand what shaped our president, don’t look to his father’s disappearance. It was his unconventional mother who made him. . . . [An] incisive biography.”
—Newsweek

“The restrained, straight-ahead focus—rather in the spirit, it turns out, of Dunham herself—pays off. By recovering Obama’s mother from obscurity, A Singular Woman adds in a meaningful way to an understanding of a singular president.”
—Slate

“An ambitious new biography. . . . Scott pursues a more perplexing and elusive figure than the one Obama pieced together in his own books.”
—The New York Times Book Review

“In her own right, Ann Dunham was a fascinating woman. . . . The story of the ‘singular woman’ at the center of this book is told, and told well, by Scott.”
—San Francisco Chronicle

“What emerges in this straightforward, deeply reported account is a complicated portrait of an outspoken, independent-minded woman with a life of unconventional choices.”
—USA Today

“We get a much fuller story of Ms. Dunham’s life in A Singular Woman, Janny Scott’s richly researched, unsentimental book.”
—The New York Times

“Janny Scott packs two and a half years of research into her bio of Stanley Ann Dunham, the quixotic anthropologist who raised a president.”
—People

“Scott gives us a vivid, affecting profile of an unsung feminist pioneer who made breaking down barriers a family tradition and whose legacy extends well beyond her presidential son.”
—Publishers Weekly (starred)